Call you back?
0800 331 524
Cart (0)
ua | en | ru
Ray-Ban history
About us
Delivery and try-on
Discounts
Original vs fake
Contacts
Warranty
My account
• We are an official Ray-Ban seller, check on official website (see Kyiv) •
RB.UA
› Wiki Ray-Ban
› The history of the legendary brand Ray-Ban

The history of the legendary brand Ray-Ban

It starts in the late 20s of the last century. The aviation industry has grown rapidly. In 1927 pilot Lindenberg made the first flight across the Atlantic Ocean on the monoplane "The Spirit of St. Louis". Developed countries actively invested in the development of military aviation. Commercial airlines opened up and soon the skies were filled with flying machines.

But there were problems behind the clouds. One of the most serious problems was the glare - a bright glare that blinded the eyes of the pilots. It was so painful that the pilots of the American army had nausea and headache.

In 1929, Lieutenant John McCready of the US Air Force approached Baush & Lomb to develop goggles that would keep out the glare so that the pilot could see his surroundings clearly. The scientists of the company accepted the challenge and began to study the effects of light and the impact on vision of strong light sources.

The company, which was already a leader in the field of optics at that time, managed to develop a glass optical lens capable of blocking a significant part of the visible light, while maintaining a clear view. The result was glasses with green reflective lenses that blocked ultraviolet and infrared rays and provided high-definition vision. These green lenses are called Anti-Glare.

US Air Force pilots finally have goggles that can not only save them from blinding eyes, but also serve as a barrier to infrared and ultraviolet radiation.

In 1936, Baush & Lomb introduced potential consumers to the first mass-produced sunglasses model, called the Anti-Glare. They had plastic frames and cost $3.75 a pair, 15 times the price of other sunglasses on the market at the time. In 1937, "Baush & Lomb" organized its own study of the possibilities of wide distribution of their product.

The first step to gaining popularity was the name change from "Anti-Glare" to "Ray-Ban". This trade name was registered with the US Patent and Trade Names Office in 1937. Two months later, advertisements for Ray-Ban(R) sunglasses appeared in newspapers and magazines.

The second step was the release of Large Metal sunglasses - they resembled those worn by aviators. The model for professional pilots Large Metal has been in service for seventy years, enjoying the unfailing trust of aviators of all ranks.

In the early 40s, the company directed a significant part of its production and research resources to defense needs. But one of the developments has found application in the market of sunglasses - it was a lens with a gradient mirror coating.

Large Metal glasses with a gradient mirror surface first went on sale in 1948. Today, this technology is used in the Ray-Ban Driving Glass B-15 TGM(TM).

In 1952 there was a real revolution in the history of the development of sunglasses: Baush & Lomb developed neutral lenses with a significant light absorption coefficient, which could be widely used. These new green tint lenses, which let in 15% of visible light, were given the name Ray-Ban G-15(R). And to this day, they remain the most popular.

In the post-war 50s, when the fame and influence of Hollywood began to acquire a global character, and the Vietnam syndrome with its anti-militarist spirit was still mastered by the French, the famous Wayfarer model appeared, which marked the beginning of the world fame of Ray-Ban. The model gained popularity outside the narrow professional circle of pilots, finding a lot of admirers among Hollywood movie stars.

In our time, Ray-Ban glasses have become a model of quality and fashionable design while maintaining their own unique style and traditions. Quality control of glasses, perhaps, can compete with any modern Italian brand. Not without reason, now the eyeglass optics giant, the Italian concern Luxottica Group, is engaged in the production of Ray-Ban brand glasses. Every year, more than 10 million people in the world prefer glasses under the everlasting Ray-Ban brand. 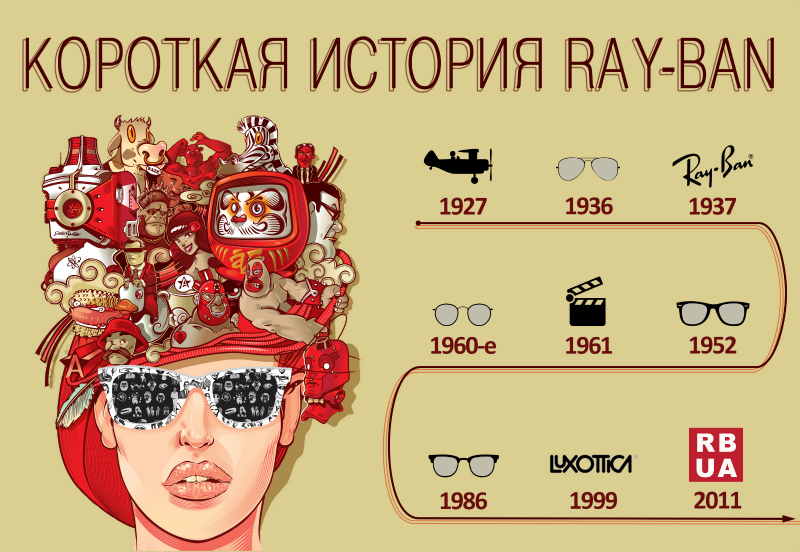 Significant events in the history of Ray-Ban

Ray-Ban sunglasses were the first designed for the US Army in 1929. These new type of goggles were able to protect the eyes of pilots from bright light at high altitudes and at the same time provide good visibility and correct color reproduction.

1936: Ray-Ban sunglasses, then known as "anti-reflective" sunglasses, are introduced to the general public. The first model is a plastic frame of "aviation" shape.

1937: The Ray-Ban trademark is registered and first appears in advertisements.

1961: Becoming a market leader, Ray-Ban begins a long-term partnership with Hollywood, seeking to showcase their products in Breakfast at Tiffany's, in which Audrey Hepburn appears wearing Wayfarer glasses.

1960s: The Olympian I and II series and the Balorama are released.

1980: First release of the Wings family. The brand's revolutionary new style: a unisex model that combines the comfort of the Aviator with the first ever single lens to give eyewear a futuristic look that hasn't gone out of style to this day.

2004: Launch of the Junior Ophthalmic collection.

Ray-Ban RB-50™ lenses are the latest development in mirror photochromic lens technology. Under normal conditions, their ability to absorb light is 80-90%. Under extreme conditions - at low temperatures and a significant intensity of blinding light - light absorption reaches 92%.

Ray-Ban RB-50 Ultra lenses, which ushered in a new era of vision protection from blinding light. They provide almost complete protection against polarized concentrated light - luminous patches of light reflected from the surface of snow or water.

RB-50 Ultra glass combines the advantages of RB-50 glass with the ability to absorb polarized light. The absorption of polarized light is incredible - up to 99.97%. The future of Ray-Ban lenses will continue the history of technological success, continued improvement in quality and timeless style, ensuring they continue to be the world leader.


The best sunglasses in the world

None of the other manufacturers of sunglasses can claim this. Ray-Ban can afford to make this claim based on its leading position in technology, superior product quality, and dedication to the common cause and talent of its people.

The Ray-Ban brand is well-deservedly known around the world for its excellent optical properties, quality and timeless style. It is one of those names associated with superior quality and incomparable performance, developed in half a century of relentless struggle for technological leadership.

That's why Baush & Lomb started out by setting and exceeding the highest standards. It continues to do so today, laying more and more bricks in the building of Ray-Ban sunglasses success.